It’s 1944 and Connie Granger’s home and family have just been raized to the ground during a bombing raid over Coventry. Trying to piece her shattered life back together, Connie finds work as a ‘lumberjill’ for the Women’s Timber Corps amongst the forests of South West England. Author Sarah Franklin explains how she balanced research with family life and why Britain’s woodlands mean so much to her

I’ve got two small-ish kids and a day job so this book got written everywhere – at music practice, at football practice, in bed at midnight. There wasn’t much rhythm and it was massively scrappy but it was what worked for me and our lives. The hardest part was endlessly wrestling with the idea of the book in my head and what was actually coming out on paper.

I was inspired to write Shelter following a controversial government proposal in 2010 to sell off Britain’s woodlands. I grew up in the Forest of Dean and it was inconceivable that this land, in my eyes entirely entwined with the people who lived and worked there, could ever be sold. It seemed as weird as trying to sell off the coast, or the air. I wrote about it for national newspaper The Guardian but it still niggled and I wanted to fictionalise my concerns. I wanted to write about what it felt like to have the very foundations of the place you live in entirely turned upside down by the decisions of bureaucrats working for what they would see as ‘the greater good’. It’s such a brilliant, strange, unique place – much of my family still lives there.

The Forest of Dean saw huge change during World War 2. There was enormous demand for wood at this time, for replacing ships’ masts, as pit props so that the much needed domestic coal production could happen safely and to ensure homes could be rebuilt quickly after the blitzes of London and Coventry. And all this wood being felled meant that the character of the Forest of Dean, and other forests like it, was being completely changed. Timber production still happens all across the UK – in fact, we can’t produce as much as we need. Lumberjills still exist, too, though I don’t think they use hand-saws like Connie had to any more.

It was really important to me that Connie came from Coventry rather than London. We hear so much about the London Blitz that readers would have with preconceived notions. Plus, from Coventry, it just seemed a more natural route that she’d end up in Gloucestershire. (Coventry is an industrial city in the British Midlands. It was bombed continuously during the war, the worst raid destroying thousands of homes and damaging two thirds of the city’s buildings in one night).

When I’m not writing, I work as an academic at Oxford Brookes University, so research is something I’m comfortable with and enjoy. I was helped enormously by both the Imperial War Museum, which has brilliant oral histories of the Women’s Timber Corps and Italian Prisoners of War, and by the Dean Heritage Museum in the Forest of Dean. The curator at the latter was kind enough to pass on to me two self-published memoirs about real-life prisoners in the camp in the heart of the Forest – I tried really hard to make sure that everything was based in fact. Years ago I’d done an O-level History project about the Home Front in the Second World War and collected questionnaires from lots of people who’d lived in the Forest of Dean during the war. These recollections were hugely helpful as well.

Inspiration came from the novels of Lissa Evans, who I adore. She writes books that are funny and poignant all at once, just spot on. I also kept thinking of Goodnight, Mr Tom, which I read as a kid and still absolutely love. Anthony Doerr wrote the best book about unusual aspects of the Second World War that I think anyone will ever write.

I’m working on my second novel right now. It’s set in the Forest of Dean again, but is contemporary rather than historical and has completely different characters in it. 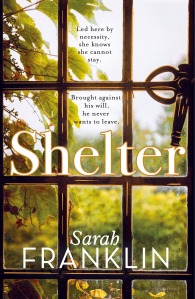 Shelter is available now with free shipping from bookdepository.com.